Are We Really Putting Our Money Where Our Mouth Is?

“Anyone who believes in indefinite growth in anything physical, on a physically finite planet, is either mad or an economist.”

The Chocó: an unknown and critically endangered habitat

25 million years ago, the Andes mountain system emerged from the boiling waters of the Pacific Ocean separating the Chocoan tropical forest from the mighty Amazon jungle. Ranging from the swampy ecosystems in Southern Panama to the pristine coastal forests of Colombia and Ecuador and all the way to Northern Peru, the Chocó was once home to a numerous amount of plant, tree, insect and animal species. 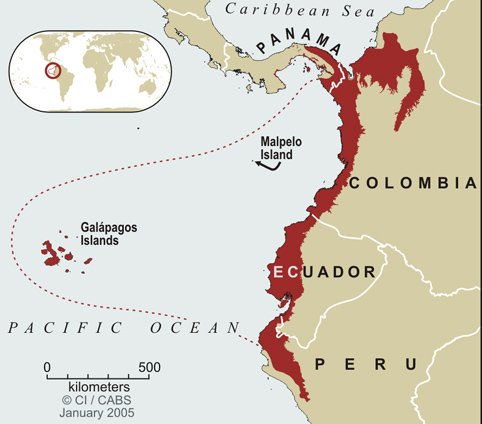 The Chocó coastal rainforest stretch from Central America to the North of Peru (Credit: CI/CABS)

The Chocó Rainforest is one of the last remaining coastal rainforest systems in the world. In the past 5o years, mankind has managed to destroy over half of this natural wonder. The Elegant Stubfoot Toad, Lehmann’s Poison Frog, the Long-wattled Umbrella Bird, the Great Green Macaw, the Brown Spider-headed Monkey, the Jaguar, and over 11,000 species of plant all call this place their home.

Unfortunately, these wonders are at risk.

It is not all doom and gloom for the rainforests. People around the world are invested in promoting the protection of remaining wildlife and biodiversity hotspots. Keep reading to discover the story of a small forest community called Tesoro Escondido (“Hidden Treasure”), where cacao producers are using chocolate – despite cacao being a driver of deforestation – to save the rainforest and its trademark spider monkeys.

At first glance, Ecuador’s capital Quito appears to be quite close to Tesoro Escondido on a map. In reality, it is a shaky bus ride, the cargo bed of a pick-up truck, a raft ride, and a few hours hike away.

During my first experience in the Chocó, I saw how little primary forest remained, and how our civilisation’s technological prowess (and resource gluttony) has gradually destroyed vast swathes of pristine and healthy rainforest.  According to the Ministry of Environment, 95% of the Ecuadorian Chocó has already been lost with little being done to reverse the trend.

In this exploitative system, nature and humans do not go hand in hand.

The first conservation lesson of Tesoro Escondido arrived early in the trip. The road to Golondrinas – the last town before the rainforest –  was owned by a logging company. We had to pay a road maintenance fee that went towards logging projects in the area to use the road. Money well spent for conservationists, right? For the first time in my life, I was understanding the full meaning of the phrase: “keep your friends close, and your enemies closer.” In the Chocó, we were the enemies.

The steep Andean slopes give way to a tropical landscape. This vast fertile lowland region is home to an extensive array of crops. It felt as if there were enough oil palm, banana, avocado and mango monocultures to feed the whole world.

When you add this to the Ecuadorian government’s desire to attract mining multinationals  to pay off their ever-growing national debt and you really start seeing the herculean conservation task ahead.

Additionally, the province of Esmeraldas, which shelters the remaining forests of the Ecuadorian Chocó, is the poorest in the country with high rates of illiteracy, unemployment and very little governmental support. Quite frankly, the social, economic and environmental context of just about every tropical forest biomes does not bode well for conservation action.

Community-based conservation: Rescuing spider monkeys from the brink of extinction?

It’s hard to blame farmers for destroying their environment. They are simply trying to make a living and feed their families. Is the Ecuadorian government to blame? Possibly. In 2007, President Rafael Correa called upon the international community for funds to reduce human impact on biodiversity in the Chocó rainforest. Unfortunately, his requests were met by an extremely unconcerned audience.

I began thinking that the people who had taken me here – two biologists from the University of Sussex in the UK and a team of local primatologists from Proyecto Washu – were completely senseless. I also started asking myself a lot of questions: How did we let this happen? Who should take responsibility for this disaster? Can we fix this socio-environmental mess?

Mike Peck, one of the biologists who visited the Chocó Rainforest with me, began to work on the solution to deforestation. In reference to climate change, Peck said, “Data doesn’t turn anyone on, I was tired of collecting data, publishing papers and nothing changed.” So he decided to take his efforts to the locals. “The deal was, don’t deforest and we’ll provide the connections and the training to produce high-quality chocolate and get you a better price for your chocolate”

A mama brown headed spider monkey and her little one (Credit: Washu Project)

The producers of Tesoro Escondido participating in a workshop on bio-fertilisers (Credit: Washu Chocolate)

The Ecuadorian brown-headed spider monkey, one of the top 25 most endangered primates in the world - (Credit: Proyecto Washu)

Spider monkeys provide vital ecological services to the many species living in the forest, including seed dispersion. Indirectly, spider monkeys contribute to carbon storage, climate moderation, and the regulation of water systems.

Sadly, the dense canopy that once provided cover for the species has been vastly depleted. The arboreal and acrobatic spider monkeys no longer have sufficient space to roam, feed and reproduce.

The Chocó Project was born in response to this imminent catastrophe. An estimated 150 spider monkeys, a 3,000 hectares landmass, a handful of international and local biologists, ecologists, primatologists, a few cacao experts, countless volunteers but most importantly, ten cacao producing families and members of neighbouring communities teamed up to create a unique community-based conservation programme.

The Chocó Project: Making protecting the environment fun and successful

Conservation can be tricky. I realized after I had arrived at the rainforest that throwing money at the environment is not a viable solution.

The spider monkey research in Tesoro Escondido started in 2005. It took the group a little more than five years to come up with a conservation strategy that would put the forest community at the centre of the preservation efforts. In 2012, Proyecto Washu, the University of Sussex and other actors signed an agreement with the cacao community. The agreement stated the cacao farms would become a buffer zone, thus preventing further degradation and deforestation. In return, the biologists and cacao experts would develop capacity-building programmes with the community to increase cacao production, secure international cacao buyers, access fairtrade and environmentally-conscious markets and, ultimately, improve their livelihoods.

While the founding members of the Chocó Project embarked on different conservation paths in 2015, the programme is still ongoing and stronger than ever. The University of Sussex has managed to create a 2,000ha protected reserve for the monkeys which is owned and managed by the community of Tesoro Escondido. The healthiness of the forest has led to the development of scientific tourism with international researchers and university students travelling to Tesoro Escondido to study its wonderful diversity.

The ‘parabiologists’ – members of the community trained in scientific collection techniques – have been essential actors in the project, not only allowing researchers to complete their studies but also managing their own reforestation or scientific programmes. This, in turn, created wealth in the community but mostly a strong and local desire to keep and maintain the forest as intact as it is, or was. The spider monkey population has since then stopped diminishing and conservationists have good hopes for thriving new generation.

Chocolate to save the rainforest?

On the other hand, Proyecto Washu successfully helped with the creation of a small producer association called Association for the Agricultural Production of Nacional Cacao, the Sustainable Development and Conservation of the Forests of Tesoro Escondido (ASOPROTESCO in short) which may well be the only agricultural association in the world with conservation as its very raison d’être. With the help of cacao experts, we’ve also managed to increase cacao productivity without further deforestation, by looking at agro-forestry systems and capturing living micro-organisms to create bio-fertilisers.

Today, the farms produce 5 tons of cacao per season, with the highest environmental and social standards. International buyers were introduced to the project, cacao producers were receiving as low as $1/ kg of dry cacao  (NY market price $USD 2,22/kg as of 10.11.17). Nowadays French-German Chocolatier Bouga Cacao buys at a minimum price of €3.37/kg and Washu Chocolate at a staggering $USD 4.84/kg, or 118% above market price.

Additionally, Proyecto Washu has worked with the neighbouring schools to raise awareness on forest conservation. Field trips in the forest to observe reptiles, amphibians, mammals, birds, plants and trees have been developed for both children and adults. Due to the trust of the indigenous Chachi community, we’ve been able to promote sustainable hunting and broadcast the community’s compelling stories on various media platforms.

With the organic certification in hand and this wonderful primate and habitat conservation story, the producers and members of Tesoro Escondido have succeeded in building an effective community-based conservation initiative that will benefit generations to come and inspire communities across the world.

“So what next for Tesoro Escondido?” You may ask.

This is where you come in.

In 2016, after I had left Proyecto Washu to work for an up and coming Franco-Ecuadorian chocolate company, Nathalia Fuentes and Felipe Alfonso-Cortes, founders of Proyecto Washu, approached me with an idea. “Fancy creating an environmentally-friendly chocolate business with us?” they asked.

And this is exactly what we’ve done. Washu Chocolate aims to generate profits by selling high-quality chocolate produced using fine-flavoured beans from Tesoro Escondido producers. A percentage of profits from chocolate sales is reinvested in conservation programmes that maintain our spider monkey sanctuary in Southern Ecuador, develop further research in other parts of the country and provide additional support to forest communities in their search for social and environmental autonomy.

You might be thinking that you have already had some Certified Fair Trade chocolate. However, these certifications might not be telling you that your fairly-traded organic product may be coming from a 400ha plantation in the middle a rainforest. Even fair-trade chocolate is likely destroying some of the planet’s most vital ecosystems.

Today more than ever we are finding the right synergies for minimising our environmental impact. Small activist groups are being formed to act against climate change and seek climate justice. We are slowly but surely recognising that indigenous communities need support to protect what remains of primary forests. We are putting social and environmental development at the forefront of negotiations and asking that they are addressed together.

Martin Simonneau is an avid traveller, and a  rainforest and chocolate aficionado. He enjoys new adventures in the most remote environments that shelter extraordinary species. He also enjoys a good French cheese when he sees one.

Nathan is the co-founder and Chief Marketing Officer of Plan A. A specialist of cultural and social narratives, he holds two Masters from the Sorbonne and the IEDES and a BA (Hons) in Politics and International Relations. He has previously worked as a reporter in France and Brazil, as well as in development and management departments in educative institutions.

Down the rabbit hole…

How we Shape Environment and its Consequences

Hi, if you are reading this message, you are in the anthropocene, the period during which human activity has become the dominant influence on climate and the environment.

The Business Case for Climate Cooperation

As if in a wicked game of Twister, it seems that we have received a new dare from destiny: cooperate or start sweating.

Discover the why, how and who of our new campaign Big Teeth, Big Hearts.

Understand the problem, discover the solutions.Subscribe for tips, stories and updates on sustainability.